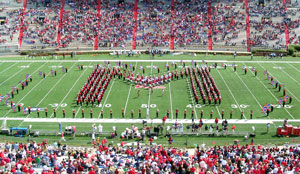 In addition to the Marching Band there are several “pep bands” formed out of “The Pride of the South”. These Pep bands perform for numerous functions such as pep rallies before each home game. Another extension of the Ole Miss Band is the Ole Miss Basketball band. The basketball band supports both the Rebel and Lady Rebel Basketball teams at all home games after football season, as well as traveling to the SEC and NCAA tournaments annually.

The Ole Miss Band is comprised of students from diverse courses of study such as Pre-Med, Criminal Justice, Engineering, Political Science, Journalism and countless others. We offer competitive scholarships for students of every major in the University, contingent upon funding.

If you are interested in participating in an outstanding college band, the Rebel Band has much to offer you.